"If there is one clear message you are hearing at Comdex, its that we believe OS/2 is the operating system of the 90's"

Note: In some cases, I have edited the images to make them smaller and/or to add the dropshadow or highlight certain points. Some images I don't put up, if I feel they don't belong here or if they are essentially duplicates of others already here.

A number of these screenshots, ironically, seem to be whilst viewing the Crash Gallery :) If you're wondering, I have checked my html. 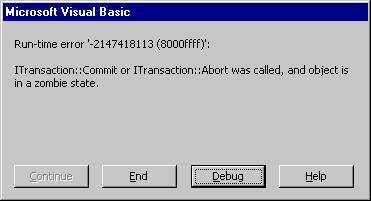 6 December 2002 David: "A colleague of mine had this error whilst using Visual Basic... What's a zombie state? Are there also vampire states?"

3 December 2002 Aza: .. <some healthy expletives sanitized> ".. I still can't add a new dial-up connection. I suspect the only way to fix this is to reinstall Windows" 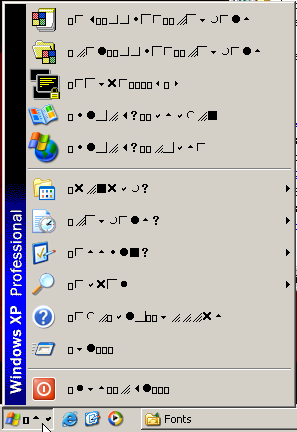 2 December 2002 Mikkel: "The first one <some more expletives sanitized> appeared when I was backing up the fonts installed on my windows box. I was COPYING (not moving, of course) the fonts from the fonts folder to another location. I have seen this on Win98, WinNT, and XP. The second one (maximum_secrets.png) appeared when I installed a new DVD-drive, and decided to try it with windows media-player." 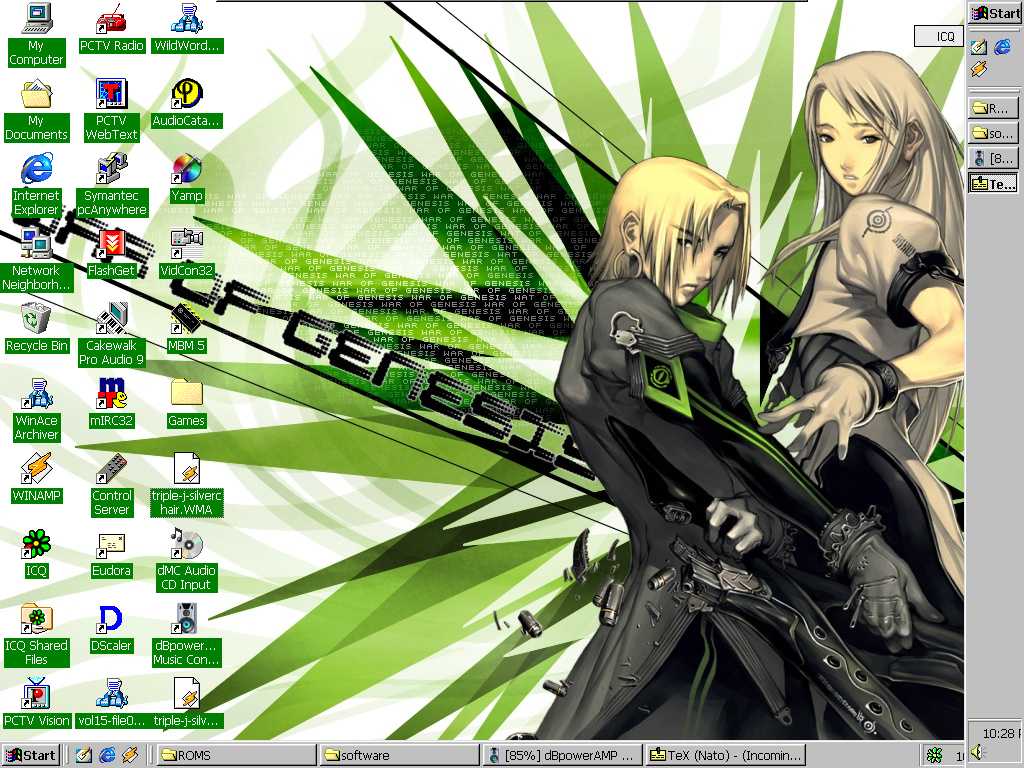 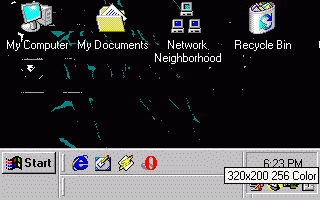 25 November 2002 Nick: "Thought you might like this bug I experienced one day in Windows 98. Two taskbars... yes that's right TWO and they BOTH worked, however only the lower start menu would appear when I pressed the windows key on the keyboard... The other pic is when one day windows decided to boot into 320x200 res."

18 November 2002 James: "I .. send you this sqlserver error. It happened when I wanted to see the status of the jobs at enterprise sql server 7.0. At school, we joke about error 0 is user/programmer error, but this is hilarious :)"

6 November 2002 A rather odd error sent in by Alan: "I thought you might like this for your collection :-)".

(Update 7 February 2004: Alex writes to clarify: "This is related to AVI rendering, and 'pin' is just the technical term used in this field. Nothing odd about that ;)"). 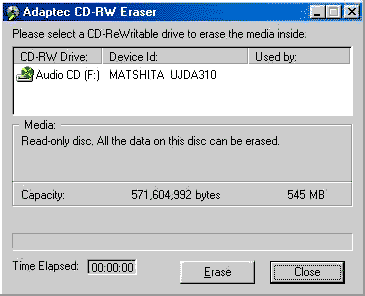 10 September 2002 Not a Microsoft error. Note the rather peculiar message about the media type. Thanks to Rene for this one.

2 September 2002 "It's not a Microsoft product, but funny nonetheless: In Fathom, a low-end statistical analysis package, I received the attached alert window when I tried to open a file. When I tried again, it worked, without telling me what didn't happen this time." - Phil. 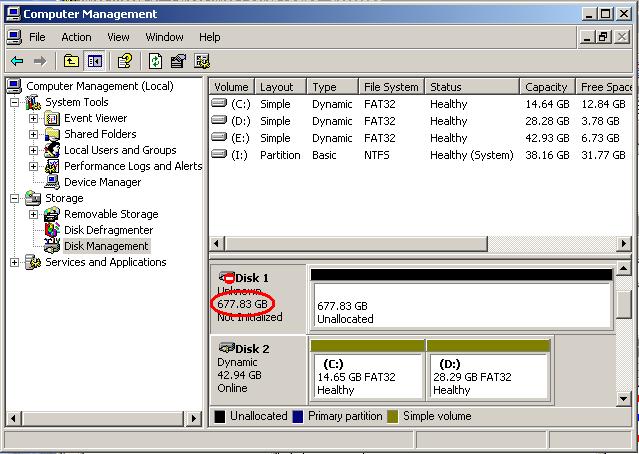 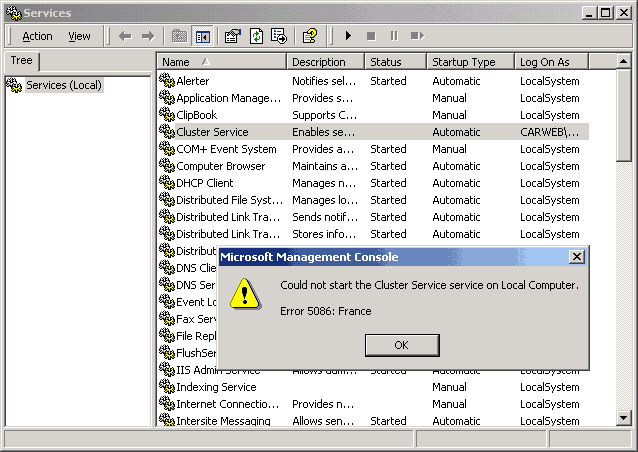 22 August 2002 SQL Server Cluster: Matt writes: "A friend just showed me your site, and a felt I should contribute having seen a genuine mind boggling error." 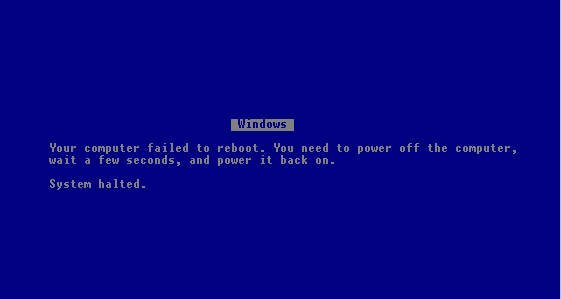 27 April 2002 Travis writes: "Since my computer locked up here, I couldn't take a screen shot, but I reproduced it in DOS using (as far as I know) the exact wording I originally got. This is a Windows ME system. I got this BSOD the other day when I needed to reboot my computer (like all Windows users need to do seemingly 50 times a day). Has anyone else ever seen this before? I thought it was pretty funny... I can't imagine any reason why any computer would have problems rebooting. I have no idea what caused this; all I know is I've never seen it before, and it has never happened since. Of course, the one word that can be used to sum up all Windows error messages is "ambiguous." It would be nice if it would at least tell me WHY the problem occured and (most importantly) what to do about it.". I fully agree with that last point. Software developers, are you listening?

21 May 2002 Adam writes: "This error happened using Stardock's Object Desktop on NT4. My only reaction was "Huh?""

16 April 2002 This one probably non-Microsoft: Robin writes: "Here's a new one. I got this after uninstalling some software that ran automatically when Windoze starts up. Although a bit of reg hacking would sort it out its a work computer and I can't run regedit so I'm stuck with it. Windows version is NT4.0 Workstation SP6."

7 April 2002 Ray writes: "Here's a pic of an error I got when trying to shutdown. I don't think I even ran Excel during that session!" 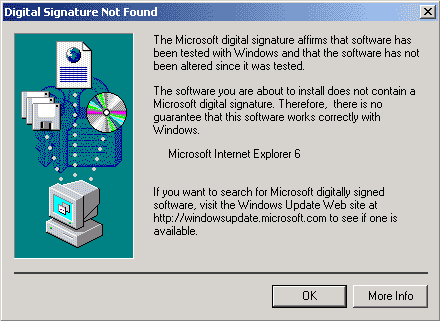 7 April 2002 Pablo Diaz writes: "While Installing IE6 on a Win2k Server box, I got this error, saying that there is no guarantee that it will work correctly with Windows :-)" 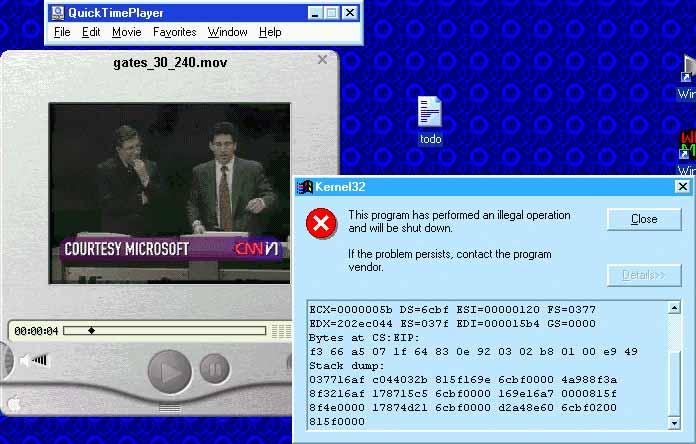 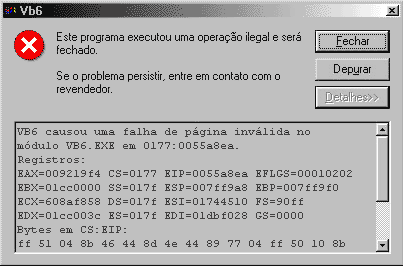 20 December 2001 Marcos writes: "on my computer, everytime I use Visual Basic 6 and close it, an error message appears hehe ... EVERYTIME!". 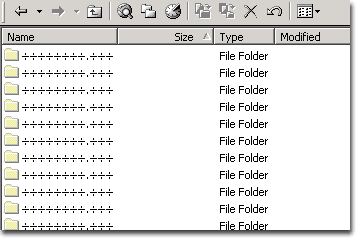 16 November 2001 Paul writes: "i just formatted my d drive(through the mmc console) then clicked on it in explorer and saw all of the crosses.". 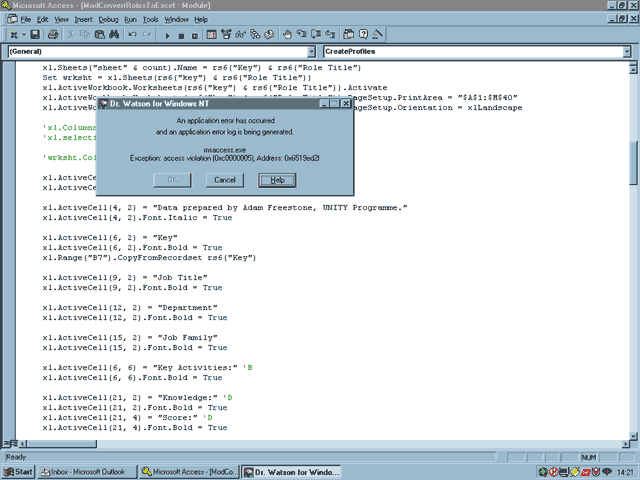 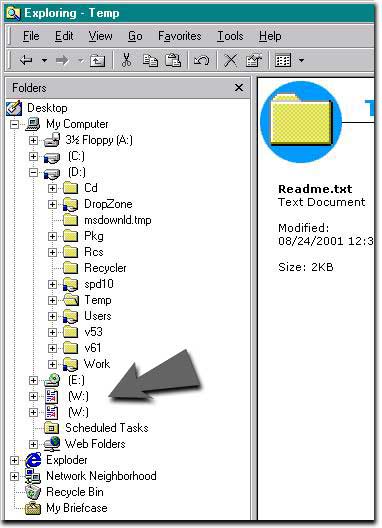 25 August 2001 Sidney S. writes: "this is something that happens to me often. My Printers and Control Panel icons get changed to W: drives and become inaccessible unless I refresh the window (F5). It's actually documented as a bug by Microsoft and the fix is to refresh the window." Actually, this happens to me often too, since I last reinstalled Win98SE. I wouldn't call "refreshing the window" a "fix", though, that just fixes the symptoms, not the problem itself.

24 August 2001 Nayaranan writes: "This comes when you access some MSN pages using Netscape browser/ communicator. This doesn't crash anything, but you have to keep hitting OK a couple of times finally to get a Javascript error (and the page won't download properly)." That is a pretty annoying message. 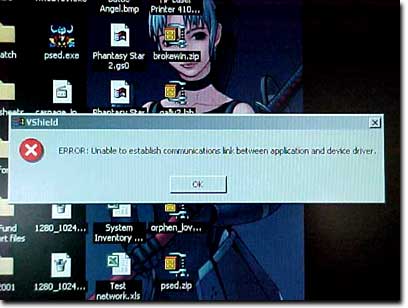 25 July 2001 Tim M. writes: "I keep getting this odd error message when I startup Windows 2000 and McAfee's Shield application. It says it is Unable to establish communications link between application and device driver. I do not know of any device that needs Shield to run it..."

16 July 2000 Blake H. writes: "well, i was browsing your site, looking for new, fascinating errors ... <snip> ... in excel... something like ERROR: Unspecified Error: There is no error message for this error code: Error 5632. As i started outlook to write this email, irony of ironies... outlook crashed! Is there a conspiracy?"

28 April 2000 Paul D. writes: "Something snarfed in my taskbar, leaving the attached chunk of menu hanging around in the middle of the screen. While not exactly a real or particularly damaging incident, I know several people ... who this would freak out to no end."

25 April 2000 Adam B. writes: "I don't know why but this made me laugh. When I opened your microsoft crash gallery, well see for yourself." 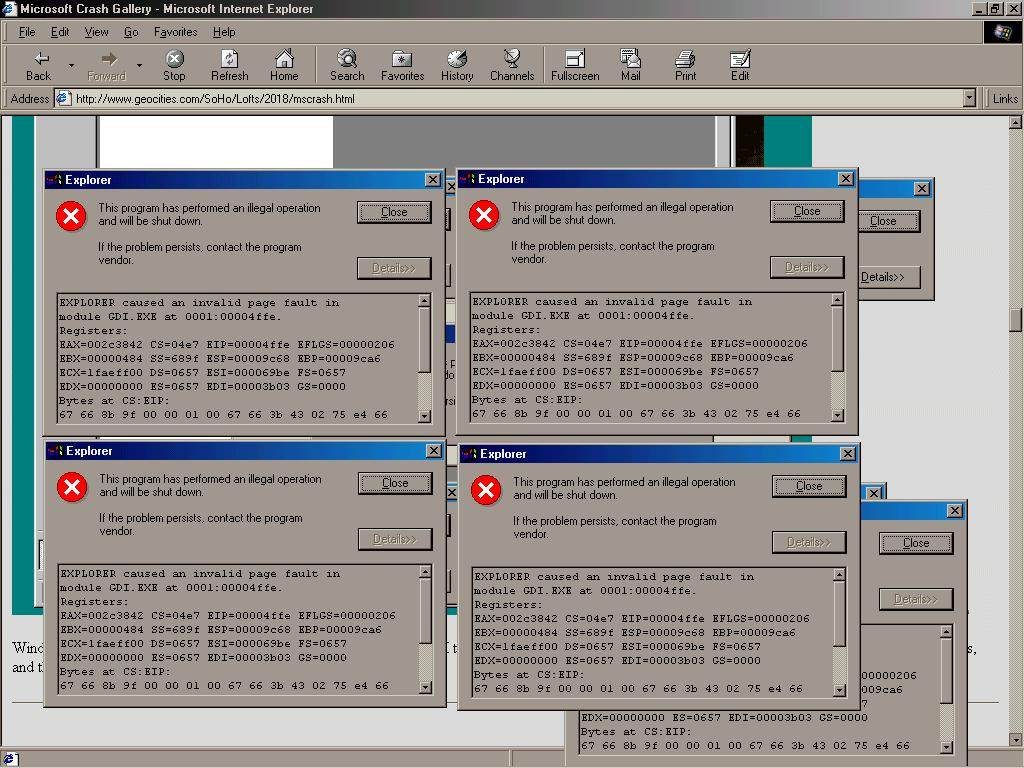 21 March 1999 Roby (aka Casper, from Lithuania) sent me this one. In his words: "there were launched Outlook Express, IE4, CorelDraw8 & AVP monitor. At the first crashed explorer (Win98), then i moved crash box around the screen, after, somehow managed to restore Outlook and from send message > file attachment window launched Lview and saved previously captured screen. Finalissimo: Win crashed totally :("